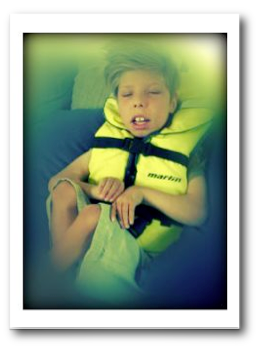 Shawn has just returned back for breakfast after his overnight at Mac’s school camp.  Mac is sleeping in a dorm room with three other boys and Shawn is in the next room… It was decided Shawn head down each night just to help out since Mac’s sleeping is still a fairly new phenomenon.

To give Mac and the boys some independence we decided to give them a walkie talkie to tell Shawn if there were any problems.  We had thought the rooms were adjoining but this wasn’t the case so the walkie talkies were a good option and the boys were keen to take on that role.

All boys in bed…
Mac pretty much asleep as soon as his head hit the pillow.

Shawn:crrrcht… OK (chuckling), how about I’ll
presume he’s fine UNLESS I get a call.

Tom: crrrcht… Shawn, Mac’s making a noise
and we can’t get to sleep

Shawn: crrrcht… What kind of noise.

Shawn: crrrcht… Oh, that’s not that a bad noise (thinking of all the dramatic noises it could have been),  maybe you guys aren’t trying hard enough to get to sleep.  See how you go if you just ignore it.

Shawn checked them a little while later… all sound asleep.

Shawn went in to assist.  Only to find Mac really sound asleep not making a peep.  As he rolled Mac, just in case he was a bit uncomfortable, he heard a “weird moaning sound” from one of the other beds….

Ahhh, too funny, Mac wasn’t actually the culprit.  Sid, one of his roomies, was the ‘maker of the sleep moaning sounds’.

Tom settled back in and all boys slept for a few more hours.

Well done guys – you are all kinds of awesome!

Filed under Access all Areas, friends, Inclusion... straight up!, the big picture, things that make me go "glll"