Unshackle the artist within…

How does a child who has no independent or purposeful movement draw or colour-in on his own?

How does a child who is unable to grasp or hold things draw on his own?

How does a child with significant vision impairment draw on his own?

It was one of my biggest concerns.  I wanted Mac to have the luxury of being in control of some of his art – I wanted him to draw on his own…

I have been harassing Mac’s Pa for a few years to make him a ‘remote control texta’ (among other things).

Mac received his Color Bug for Christmas this year.  I haven’t been able to find them in Australia, but a friend sent it over from the USA for us.

We have modified Mac’s remote control by putting a single bar across the two levers.  This allows him to use exactly the same drive action (differential drive) as his modified electric car.  It is much easier for him to learn to use one style of switch for the same action (makes it easier for us to drive too).

This is Mac’s Remote Controller and Color Bug

and this is his first artwork he and his Dad did in collaboration.  Mac was in control of blue and orange, and Daddy, the green. 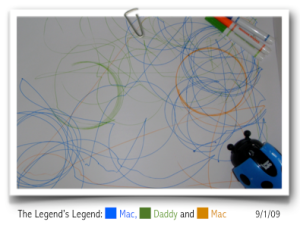 To find out more about the Color Bug (or for us Aussies… “Colour” Bug) visit www.rcarttoys.com and watch the video.

Filed under The 'mod' squad, What's in my Pencil Case

The class buddies arrived in the form of very enthusiastic sixth graders.  Mac got to meet his buddy, Ryan. He has met Ryan a couple of times as he is my cousin’s son – but hasn’t had a lot to do with him.

It was nice to hear Ryan had actually requested to be Mac’s buddy and was proudly declaring to everyone that “Mac is my cousin”.

During the playground break when Ryan was busy pushing Mac around the grounds in his chair and trying to ensure not too large a group was alongside I could hear him declare… “I can manage on my own you know, he doesn’t need a crowd staring at him”.  Oh well, the novelty will wear off, most of the kids just have lots of questions and are excited about Mac’s arrival – they have been expecting him.

As Ryan and Mac were wandering past one class I heard a boy of about 10 proclaim “Mac is Awesome” to his mate, who responded “yeah, he is so cool”.   Another contributed… “and his wheels are MAD”.

As a parent it made me smile.  We all want our kids to be liked, to fit in, to be accepted.  With a child with profound disabilities heading into a mainstream environment it has been hard to guage what the response could be.

Guess I can’t complain – I think he’s “awesome” too.

Filed under Preparing for Big School