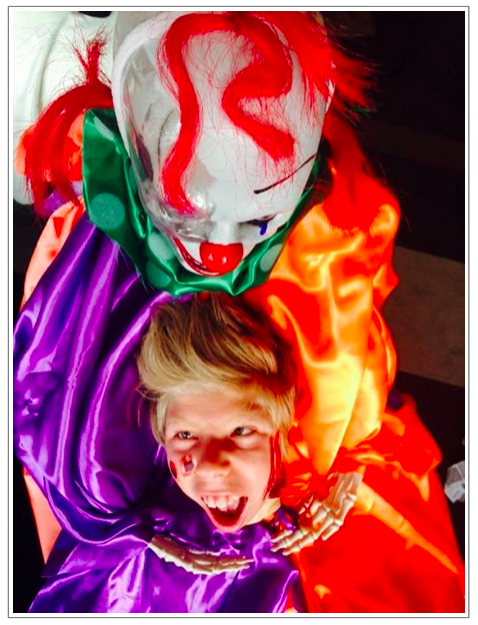 We’ve been away.  A visit to the US of A allowed Mac, among a great many other things, to enjoy his first ever Halloween in style.

As our travel itinerary was shaping up with us somewhere between Arizona and California for Halloween… we decided Las Vegas might be the place to go.  They have a street parade on Freemont Street, it seemed like a fun place to be.

Mac and his mates had done some research on possible ideas for a costume before he left (thanks Google & the “Tuesday afternoon costume committee brotherhood”).  The general consensus was that creepy clowns, blood, gore and/or maybe something with a severed head were the preferred options.  Seriously, these kids have got 11yo boy down pat…

I was a little nervous.  Creating a costume that would stack up in the US from the confines of a hotel room – that would meet both Mac’s & his mates’ expectations? Was it possible?

Thankfully, there were plenty of Halloween pop up shops available for our shopping pleasure prior to getting to Vegas.  Shawn found a fab ‘creepy clown’ balcony decoration suitable for hanging above the wheelchair to allow the skeleton clown to appear as though it was holding Mac’s severed head in its boney hands. “Hacky the Clown” (as he came to be known) was the perfect fit.

It worked a treat.  He was far from cute!

So many admiring glances and looks of pure joy from everyone he passed – with the occasional double take as his head moved around when they were least expecting it.  You’ve never seen such a delighted severed head.

Oh… and the creepy clown voice audio we put onto Shawn’s phone so we could ‘bluetooth it’ to Mac’s portable speaker if anyone was in earshot – well, that was more for Shawn’s and my enjoyment 😉 .

Mac certainly held his own in the parade and got tonnes of wonderful photos with plenty of other “creeps” on the night.

ABOVE: Mac and Hacky with zipper face guy and his fluffy friend, a devilish dude + the Hulk Hogans
BELOW: Mac’s tattoo (to meet the ‘gore’ requirement), a family portrait and Mac, Hacky and Gene Simmons

It a was a fantastic night, so much fun.

The social media platform we chose for Mac to stay in touch with friends back home was firing on all cylinders with everyone loving his costume and many sharing their own creations from their own fun nights.

Thanks Freemont Street and the Las Vegas Halloween Parade… you have set the bar high.

Filed under Inclusion... straight up!, things that make me go "glll"

It’s probably fitting when your name is Macdonald you pick a character with Scottish heritage for book week.  The fact that character also has a disability was really just a happy co-incidence, the reality is… it was “all about the hair”.

Mac’s choice this year was the impressive auror Alastor “Mad Eye” Moody, from Harry Potter.  With perfect hair to pull of the look Mac was pretty impressed with himself.

Time constraints (and… oh, yeah, real life) meant we didn’t quite invent a recumbent wheelchair broomstick.  Fortunately, the freezing wind was of no concern by the appropriate choice of Dad’s Driza-bone oilskin jacket keeping Mac totally snug throughout the book week parade – he certainly fared better than some of the other muggles whose costumes would have been ruined by the addition of a jacket.

Click this link to look back at book week’s past?

Filed under Accessing the Curriculum, Inclusion... straight up!